by Meiling Wong
in Fun With Kids, Giveaways
6
0
SHARES
81
VIEWS
Share on FacebookShare on Twitter
Out of the blue, my six-year-old decides to audition for the part of Molly in Annie The Musical.

We’ve just started a performance course at Kids Performing, a local school that teaches kids the finer art of singing, dancing and well, performing.  Not wanting to rain on her parade that she had just started and being the supportive mom that I am, I consulted Joanne Buxton Leow, a mother of two and co-owner of Kids Performing and Precious Entertainment, a talent scout company.

As it was our first auditioning experience, she advises me: “Do not send your child into an audition unprepared. Go for an audition workshop. It will prepare the kids with a medley to showcase their singing and dancing abilities; and properly brief the kids on how to act or behave during the audition.”

So, I signed her up for an audition workshop organized by Kids Performing and conducted by her business partner, the multi-faceted and talented entertainer Kuo Po who among her many distinguished talents – the woman is an accomplished singer, saxophonist, entertainer and producer, has a talent for sniffing out and cultivating young stars.

Kuo Po’s most famous and successful child prodigy to-date is Julia Abueva who appeared on Oprah Winfrey’s show and was proclaimed by Oprah (only the most influential woman on Earth) as one of the world’s ten most talented children in 2008. Julia was previously managed by Precious Entertainment, an off-shoot of Kids Performing. So you can understand my reasons for putting my daughter (talented or not, doesn’t matter) within her radar. *wink,wink*

Check out the video below of the kids on the first day of their audition workshop performing the specially choreographed medley that Kuo Po created to be used in the audition.

Being trained under a seasoned entertainer meant that you get professional quality. Even though we paid for a one-day workshop (S$150), Kuo Po asked the candidates to return for a second workshop to ensure that her students know what to do or expect at the audition.

We were also very happy that Joanne arranged for the kids to have their hair and make-up done by Maria, a mother who found her calling in theatrical makeup, on the day of the audition. 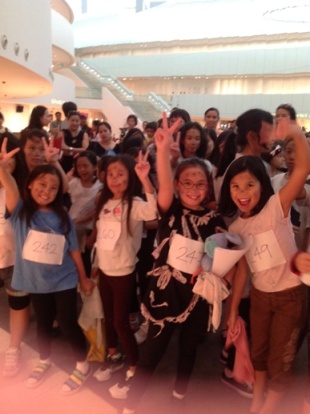 The competition was rife. All in all, over 300 girls in Singapore vie for the parts of orphan girls – Molly, Pepper, Duffy, Kate, Tessie and July (aged 6 – 14 years old). Three girls will be selected for each orphan role. The girls will then take turns to perform in the musical. 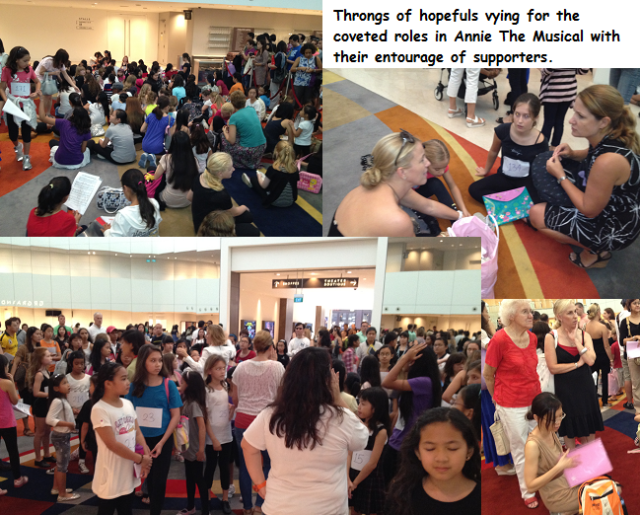 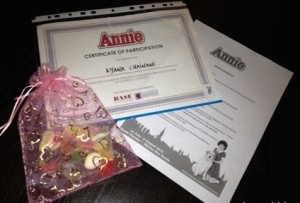 After 25 minutes inside the audition theatre, a group of girls came out. Some were in tears, one was inconsolable.  Others were solemn. This was the batch that did not make it.

My daughter was in this batch. She was disappointed, but thankfully not too upset. I think the certificate and bag of candies did the trick. (Good thinking producers!)

Eight other girls from Kids Performing stayed on for a second round of script reading, singing and dancing.  In the end, it was her friend Chloe (#233) who won one of the coveted spot to be Molly. We’re so happy for her and will definitely look out for her in the musical!!

Annie The Musical is jointly presented by Lunchbox Theatrical Productions and Base Entertainment Asia. It will run from 10 July – 5 August 2012 at Marina Bay Sands Grand Theater.

For those unfamiliar with the story of Annie, it is a heart-warming tale of a young orphan girl’s journey from the hard-knocks New York orphanage to the luxurious home of powerful, self-assured billionaire Oliver Warbucks. This rags-to-riches story of Annie has been told all over the world for decades, in Broadway and classic film musical.Expect brilliantly memorable scores including “It’s The Hard Knock Life”, “Easy Street” and the legendary “Tomorrow”, fantastically visual choreography, and a side-splitting funny script.

2012 marks the 35th Anniversary of ANNIE. So don’t miss this opportunity to see one of the best-loved family musicals of all time.

How Can You Inspire Your Kids To Think?

Criteria To Choosing The RIGHT Primary School For Your Child

30+ Movies About Parent-Child Relationships To Watch With Kids

Fun Activities For Kids That Are Free in Singapore

Over 100 Best Animated Movies to Share with Your Kids

Reading Motivation for Kids: A Critical Life-skill to Cultivate

This site uses Akismet to reduce spam. Learn how your comment data is processed.

No Result
View All Result

Be The First To Know

DIY: How to make Fluffy Slime at home!